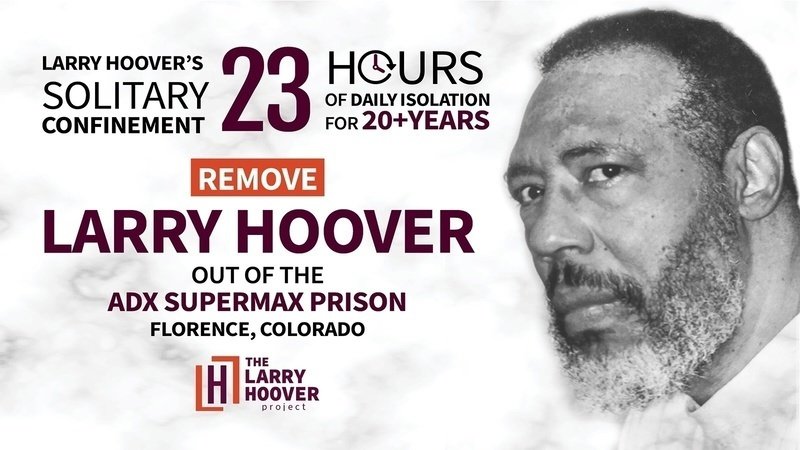 Larry has spent over 2 decades in solitary confinement in ADX Supermax in Florence, Colorado. He is serving 6 life sentences for non violent drug related offenses.

Before being sentenced to spend the rest of his life in solitary confinement, and with gang violence beginning to surge in Chicago and other inner cities, Larry, while serving time in Illinois State Prison, penned a manifesto called “The Blueprint” which was intended to eradicate gang violence from the streets and to steer those who were previously involved in such activities towards inner city growth and development. By steering folks towards civic engagement, it would aid in disposing these depressed areas of gang violence.

Due to Larry’s efforts with United in Peace gang violence dropped precipitously and more people in Chicago were becoming actively engaged in local politics. Through his 21st Century Vote initiative, perhaps the most rigorous inner city get out the vote campaign his country has seen, candidates who received his endorsement were being competitive in political races across Chicago and in the Midwest. Once the federal government received notice of this work, they maliciously prosecuted him and the rest of 21st Century Vote in order to dismantle their efforts. Ultimately, through seemingly illegal wiretapping of unwitting prison visitors who came to see Larry, the federal government used this evidence to convict him of 6 life sentences all spent in severe isolation in the most secure prison in the world; robbing him of human contact. Since his federal conviction, he has been housed in the same unit as the Unabomber, Al Queda leadership and notorious serial killers.

At ADX the Control Unit is the most secure and isolated unit currently in use. Prisoners in the Control Unit are isolated from the other prisoners at all times, even during recreation, for extended terms often lasting six years. Their only meaningful contact with other humans is with ADX staff members. Larry, for 19 years was housed in the Control Unit.

The compliance of Control Unit prisoners with institutional rules is assessed monthly. A prisoner is given credit for serving a month of his Control Unit time only if he maintains clear conduct for the entire month. As mentioned above, Larry had clear conduct for 17 years straight, but was still resigned to spend ALL of that time in the Control Unit without being removed.

It’s important to highlight that ADX Supermax tells its inmates that to be moved from this prison to a less restrictive unit and ultimately earn their way out of ADX, inmates must maintain clear conduct for a specific time- usually 36 months(as mentioned above, Larry had 17 straight years of clear conduct), participate in recommended programs and demonstrate a positive institutional adjustment. These 36 months consist of extreme isolation inside of a cell on an average of 23 hours a day, including during during meals.

For these reasons, Larry presents a compelling and appropriate case for clemency and the ability to be removed during the process to a federal prison that provides him comfort as a senior citizen. With no parole in the federal system and no ability to make an appeal to be removed to a less severe prison where Larry can be closer to his family in Illinois, he has essentially been condemned to die under the threat of isolation and the inability to feel the human touch of his loved ones. Unless Larry is given mercy by the President, he will not be able to achieve these basic requests.

Keeping Larry in ADX serves no practical purpose. He has shown that he can and is more than willing to help clean up Chicago and other inner cities. To keep him from this meaningful work would only be a negative. Furthermore, to keep him housed in ADX will only continue to waste taxpayer money. Larry has more than paid his debt to society by serving the past 2 decade’s years of his life in isolation laboring under the dark cloud of dying there.