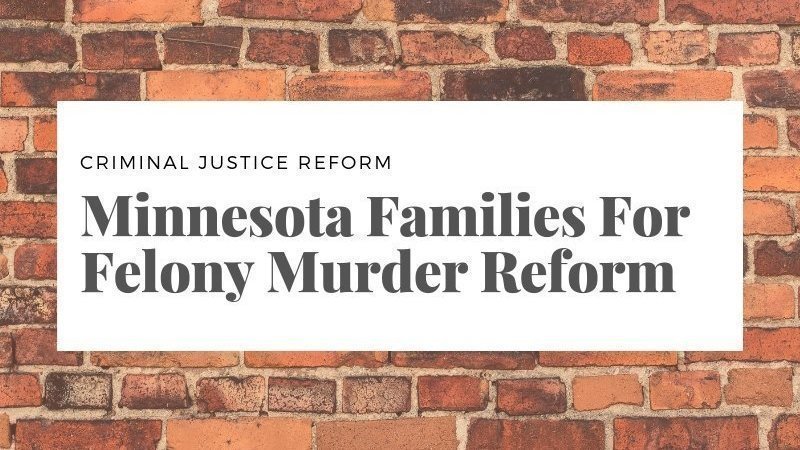 Innocent Appeal. Toni Cater started this petition to Minnesota State House and 2 others

Please help us end the wrongful murder convictions in Minnesota.  Did you know in Minnesota people are being sent to prison for murder who did not kill anyone?

Under the Felony Murder Laws as written there at least 473 individuals in Minnesota that are currently serving inherently long sentences for a homicide they did not commit!

The Felony Murder Laws allow that even if someone was unaware that a killing would or did take place, they could still face a first-degree murder charge and receive a sentence that is equally or, in some cases, more severe than the one handed down to the person who actually committed murder.

By signing our petition you are telling the elected officials in Minnesota you believe these laws need to be reformed or abolished like so many other states and Countries.

These laws have historically been used to incarcerate young men of color and women.  Minnesota is no different.  Feel free to visit our website for more details.

Under a Reformed Law in Minnesota a person could only be guilty of “felony murder” if:

1. The person is the actual killer.

The above reforms would end the practice of sentencing people who did not commit a homicide (or even have knowledge that a homicide occurred) to a similar sentence as the person who committed a homicide. Additionally, law enforcement would have a powerful tool in their toolbox to help identify who was directly responsible for a murder.  We believe this reform would create a more proportional and equitable sentencing in Minnesota, while serving public safety by holding those who harm or kill accountable for their actions. This reform would give the courts and judges the ability to convict and sentence people according to the actual crimes they committed.

We will push for these Reforms to be made retroactive. This would allow for anyone currently serving a sentence under any Felony Murder law in Minnesota to apply for a review and resentencing of their case. The reform would also allow the courts to review the evidence and the role of each person involved and have the charges revised according to the personal culpability and actions of each individual.

PLEASE JOIN US By signing this petition and telling the elected officials in Minnesota that the Felony Murder Laws of Minnesota must be reformed and those serving time under these laws allowed to be resentenced to the crimes they did commit!

#FMLR Minnesota Thanks you in advance for helping us create a more JUST Minnesota.